Last month my cousins were over from the . So as part of the Mumbai tour, we hung outside Mannat - Shah Rukh Khan's villa at Bandstand- for a dekko. To no avail - all we got was overhearing one security guy telling another that "Saab abhi nikala hai. Dhyaan rakhna".

We did however get a peak at his fleet of BMWs from the gate of the complex (the one on the side road which leads up to Mount Mary Church). This led rise to us discussing the newspaper report that SRK's cars are all BMWs numbered 555.

Moving on from Bandstand, we went off for dinner and a drive later along around 11:30 pm.

Suddenly a vehicle zoomed past us - and my cousin quite casually mentioned - "Hey there's a silver BMW ending in 555 - Didnt you say SRK drives in one of those?"

So we revved up behind the car - honking off a rickshaw and everything else that appeared in between. Getting closer - we saw the car led by a Gypsy with blinking lights and 3 security guys. Also the BMW was a 7-series sedan - so good chances that this was SRK's car with him in it. 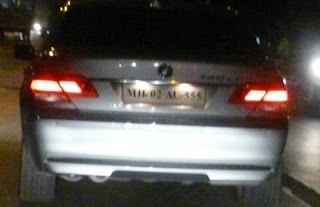 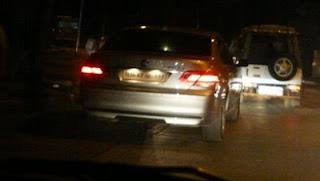 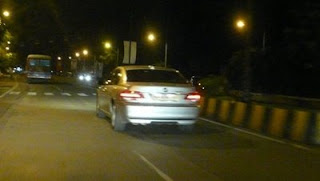 We caught up soon enough (or rather they got bogged down in the traffic on Perry Road) and we finally stopped at the red signal - parked parallel to this car. My wife and cousins waved and danced like true mad fans - yelling "Shah Rukh Shah Rukh" - hoping he'll pull down the dark windows and wave back.

Well - the story ends on that disappointing note. After probably observing us for some time (and ensuring we're just crazy fans and not a threat - sure the security recorded my car number as well) the BMW and Gypsy cars cut through the red signal and drove off. We thought of following but noticed the 2 traffic policemen standing just ahead of the signal.

We drove back home all hugely disappointed - "Arrey Hum Bhi Santrowale hai *" so he could have allowed us a smile or a wave.

And were we behind the wrong car?
Luckily a quick Google search on the car number MH 02 AU 555 solved that one. I got the photo below on a blog site. 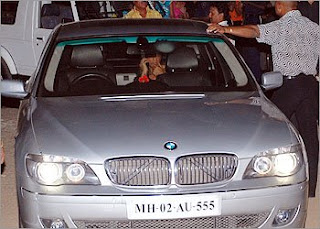 Posted by Jose at 04:00 No comments: Links to this post

The day after Sachin Tendulkar did it. Helped India chase down 387 and hit a boundary on 99 to make a century as well as the winning runs.

Yes - that's the effect Sachin has on us. The feel-good factor when he plays well and India wins.
What's happened for Indian cricket on Dec 15th 2008 is the sort of thing you feel you'll never get to watch ever. SRT batting a fourth innings century and India winning the game.
Come on - break Lara's 400* too before you retire !


And finally this classic comment on the BBC forum during the chase
"my beloved England are heading for another disappointing flat ending. We couldn't kill off a half dead runover cat with a placard in it's hand saying "do us a favour mate and kill me off"..


(*Note - My current project is in a spot of bother, hence Code Red)
Posted by Jose at 13:52 No comments: Links to this post

Our applications run on Sun T2000 servers which are configured with 4 or 5 Local zones on each Global Zone.

17th November 05:00 there was an issue on one Global Zone which caused 5 separate and simultaneous core dumps to get created on the server. One core in each Local zone.


Impact:
The 5 processes which crashed on each Local zone were


All 5 crashes above were in Library=/platform/sun4v/lib/libc_psr.so.1

Each core exits with a hs_err_
Posted by Jose at 02:22 No comments: Links to this post

We travelled to Shirdi last weekend - took my own car along for a good self-driven road trip.

The road is quite straightforward - from Mumbai take the Eastern Express Highway to Thane and Bhiwandi. This is the NH3 to Nashik, but we took a route avoiding Nashik. Left from home at 7:30 am.
First stop was for snacks at Manas Resorts Igatpuri at around 10:30 am. The resort has been nicely done-up and looks a good spot for a weekend getaway a la Fariyas. 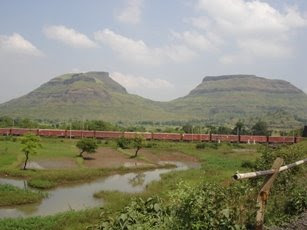 7 km after Igatpuri is the town of Ghoti which has a bypass road to Sinnar, which avoids Nashik completely. There is a board on the highway pointing to a right turn to Ghoti. The off-road leads through a market for about 2 kms, but ask for directions to Sinnar/Shirdi if confused. It leads to a railway crossing and a toll booth later - and then the bypass road smoothens out.
This route was a scenic drive through some unspoiled lands. The photos show the windmills and lakes seen along the Ghoti-Sinnar bypass road. Another advantage was no high-speed overtakers on this route, since the road is well-hidden. There are no boards informing you of this route, and you get 60 kms of peaceful leisurely driving.

At Sinnar, you rejoin the SH10 which is a straight road to Shirdi. Back to the superfast buses and crazy drivers. We reached Shirdi at 2:15 pm and quickly found a hotel for ourselves.
The Hotel Sai Baba International - which is right opposite the main gate of the temple complex. The rooms were adequate, 3 star hotel with clean facilities. 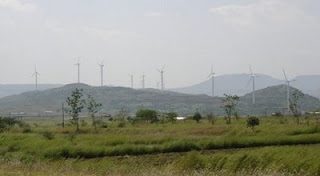 The journey took 7 hours on the way out, but we spent 1.5 hours in breaks.
The return was quicker since we knew the route well, 6 hours in all including lunch at Foodplaza beyond Igatpuri (Avoidable!) .

Posted by Jose at 02:30 No comments: Links to this post

There's been lots of news recently over Sr. Alphonsa - a Catholic nun from Bharananganam, in Kottayam district, Kerala being proclaimed a Saint on Oct 12th 2008. She will now be known as St Alphonsa of the Immaculate Conception. This is newsworthy since she is the second saint from India and the first woman.
Many would have expected Mother Teresa to be the first woman from India - but things dont move so fast in the Vatican - St Alphonsa has been canonized 62 years after her death.


I was watching the news on Sunday - CNNIBN I think it was - an over-excited reporter outside Mahim church had found a Kerala-ite lady who "had actually been to the church of St Alphonsa" and was asked in true AajTak style - "How do you feel about it?" "Kaise mehsoos ho raha hai"types.

As over-the-top as that was - it truly hit me then how proud a moment it was for people like myself and my family - those who have a small (and I mean really small) association with this saint, the town and the church. Bharananganam is a town 4 kms away from my mom's native place of Edamattom in Kottayam district, Kerala. My mom has in fact studied in the same convent school attached to this church - and when she was a student, there was the buzz around the church and convent - that of Sr Alphonsa - the recently passed away nun who led a simple and pious life. She was a model for all other girls to follow and this was part of the school's christian studies too.

Sr Alphonsa was beatified by Pope John Paul II on his India visit in 1986. [Beatification is the penultimate step in the process of sainthood]. This led to the mass following there is now - the hope that she will be declared a saint one day - and that she will intercede and miracles can happen. Throughout my childhood, we used to regularly visit the church on each visit to Kerala. This has continued till today - and is one of the things we do without fail.

I think the difference now that she has become a Saint - means Christians from all over India and even abroad will now make this a pilgrimage place. Similar to St Francis Xaviers church in Goa and Vailankanni in Tamil Nadu. So the roads have been widened, the town painted. On my last visit, the church had been restored and the gardens had been replanted completely. The church becomes a pilgrimage centre and the town prospers too. Since this is in Kottayam, a visit to the church might soon be added on tour itineraries along with the Kumarakom lake and houseboat rides.
I do hope things remain as they were - small and simple. Not turning into the commercial circus most religious places become.


Well time will tell.
Posted by Jose at 23:54 No comments: Links to this post